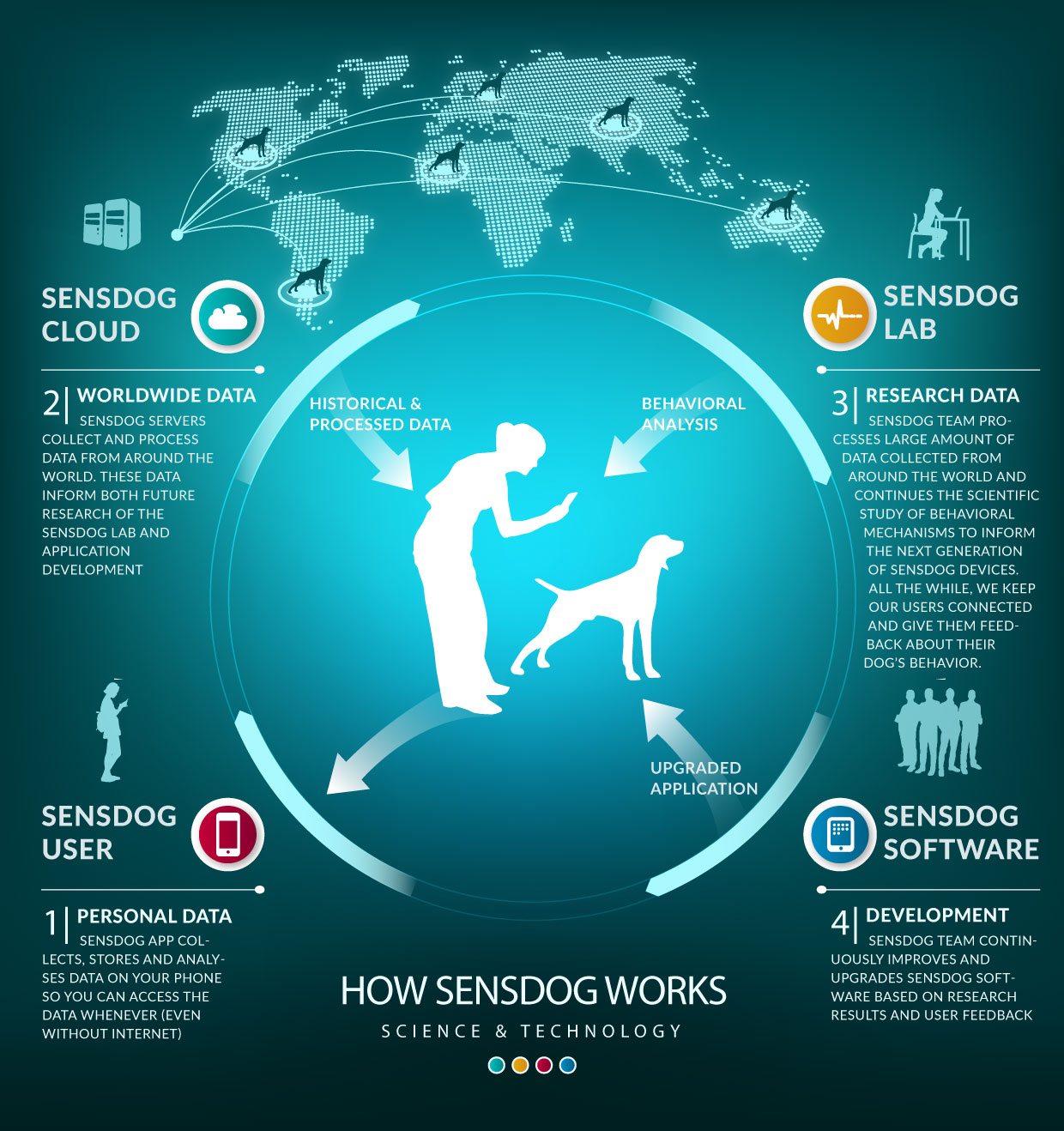 SensDog is not just a promising startup but a brand new business model regarding how can we make a viable bonding between academic science and hardcore business. It is backed by the world’s leading dog behavior laboratory and a technology startup of digital experts with several years of experience in mobile technology.
Our objective is to make the latest scientific results available to the end users by using state-of-the-art mobile technology and in the meantime also to give back the sources and the needed feedback for scientific research.  We’d like to build a new and deeper relationship between the dog and the owner which is more about understanding and accepting each other as friends than simply about the way we keep animals around us. We use the latest and most advanced technology which is available on the market now and even in the future. Working with the most innovative digital company of the world we have the possibility to keep this technological advantage for many years.

Our scientific approach is about learning and understanding dogs’ behavior as part of the human evolution; appreciating how the wild animals, following our ancestors at the dawn of human civilizations have become family members, while building a bond that is unique and unprecedented between humans and animals.

We believe that sharing our digital life with dogs and allowing them to communicate with us like we talk to each other is not only a possibility for a new way of interaction but it’s also a new kind of lifestyle to improve our natural inner part.

SensDog started with an incidental meeting between two long-time friends: Gábor Csizmadia an entrepreneur and digital expert in mobile communication and Ádám Miklósi the professor and head of the Department of Ethology at the Eötvös Loránd University.

There was an applied scientific project that aimed at developing a technology which assist dogs and humans in search and rescue tasks. However, the technical problems caused more and more delay without any promising improvements. It was Gábor’s idea, who had been working on a project for Apple Watch, to use this complete device as a stand-alone sensor and communication solution in the project. At first glance it seemed to be a strange solution but they decided to make a pilot version and test it in real-life conditions.
The rest of the story is now history.

After several laboratory and field test, years of hard research and development and the joining of several bright young researchers and developers the idea became a full-fledged business & research project. The results are so promising that it could become one of the first smart devices to revolutionize the $61 billion dollar pet industry in the US and later spread worldwide.

The last years of the pet industry have all been about GPS sensors and smart collars for pets. There were a lot of promising new products and lot of less promising failures. By examining the failures we could find two main reasons: one is technical and the other is scientific.  The technical problem is evident. To build a device with the capability to deliver the same quality as the industry titans and to step in a direct competition with some of the IT industry’s companies with the best R&D possibilities and huge financial and human resources is an assured failure. The failure is predictable.
The scientific problem is less more elusive, yet trivial: there has been a lack of scientific knowledge associated with the product. Most of the promises are absurd statements about animal behavior and some claims are evidently against the current knowledge about dog behavior. Science is science and marketing is marketing, mixing them up is not a good recipe for success.
From the first step on we have been building on these two weaknesses of our competitors and made them to be the two pillars of our project.
We have built on the number one device of the number one company. And even though this places the pricing of the final product in the premium range, the advantage is clear and the value is undoubtedly worth the money.

This way we could eliminate the risks of hardware, problems that our competitors faced, even avoiding legal or authorization paperwork. We don’t have to worry about the future either since all the technical advantages are built in the device from the very beginning.
Regarding the scientific background we work in privileged collaboration with the world’s number one laboratory in dog behavior research. This allows us to incorporate the most advanced results in our device so that we are able to deliver the latest scientific improvements to our users as soon as possible. We hope that this kind of business model will mean a clear advantage for our users and could be a new paradigm in the startup industry, as well as a promising example for the future of managing science.